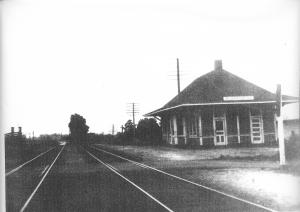 The Harrisburg Post Office at 6960 Harris Depot Road in Harrisburg Depot Park houses a collection of memorabilia from the town's past. The exhibit is maintained by volunteers and long-time residents of Harrisburg. The exhibit is open Mondays from 3 to 6 p.m. when the Harrisburg Farmers Market is open (April through October) and by appointment. Many school groups tour the exhibit throughout the year.

Adjacent to the Harrisburg Post Office, a restored Cabarrus County log cabin depicts another phase in the evolution of the area. Restoration of the structure is ongoing and it is not currently open to the public.

Many colorful stories surround the history of Harrisburg. According to the Cabarrus Genealogical Society and other local sources, a pioneer likely supplied the original name for the town - Query's Quarter. Newly-elected President George Washington recorded in his diary that he passed through Query's Quarter while traveling by stagecoach through the southern states in 1791.

Agriculture thrives in the new town and several grist mills were built, including Pharr's Mill, known for grinding corn and grain and equally infamous for social gatherings and the site of a delightful swimming hole on Rocky River.

The town's name change was derived from the Robert Harris family and his descendents. Mr. Harris was established on land of his own in 1766 and, with the advent of rail construction in the 1850s, the depot took the name of the landowner from whom the right-of-way was purchased. Harris Depot became Harrisburg with the construction of the local post office in 1874.

The railroad has historically played a key role in the town's development, as it continues to do today. The first retail establishment in Harrisburg was opened before the Civil War and many more followed with the rail line through Harrisburg. Merchants sold everything from groceries, clothing and tools to mule harnesses and plows.The emerging town center was also the location of two cotton gins and blacksmith shops.

N.C. 15 was originally the main thoroughfare through Harrisburg. With the coming of Highway 49, Town Center moved from the railroad area to the newly constructed corridor for growth and development. Gone were the days of buying six hot dogs for a quarter at WK. Baldwin Store at Robinson Church Road and Highway 49!

To support the growing population's need for easier access to worship, Harrisburg Presbyterian Church was formed. A structure was completed for the congregation in 1904 for $275.50. A Baptist congregation established Oak Grove Church in 1906 on 1.5 acres purchased for $35.The African American congregation moved from a one-room building with no floor or chimney to the structure built in 1978 for 350 members.

In the early 1900s, Dr. SA. Grier practiced from his office on Hickory Ridge Road, traveling to patients in his horse and buggy. By the early 1920s, Dr. Nicholas E Lubchenko, a Russian immigrant, and his nurse wife visited the sick in their Model A Ford. Dr. Lubchenko was instrumental in starting Harrisburg's first fire department by donating land and labor to build a fire house directly across from Schoolhouse Commons. This effort led to several distinctions for Harrisburg - first volunteer rural firefighting unit in the county and first women in North Carolina to be certified emergency medical technicians.

Interest in building a fire department grew with a fire that destroyed The Long Island Hotel, once a noted landmark on Highway 49 near Morehead Road In its heyday, the establishment was noted for lodging, dancing, food service, porches, breezeways and a covered arbor. Electric service came to Harrisburg in 1930, followed by a gas line in the late 1960s.After Harrisburg's mayor made a public request, the Department of Transportation installed the town's first traffic light in 1978.

From home schooling grew four schools to serve the education needs of children in Harrisburg. A minister met higher education needs by leading the Rocky River Academy from 1812 until 1841. By 1926 eight small schools were consolidated into the new Harrisburg School on Highway 49 for grades 1 through 11. Grade 12 was added in 1942. The 25-room building expanded to include a north wing and Agriculture Department in 1933 and a gymnasium and library in the 1950s.

On March 28, 1973 the North Carolina General Assembly ratified a bill to incorporate the Town of Harrisburg. A Mayor and Town Council were appointed pending elections held in May. Town Hall was completed in 1980 and the town's waste water system was completed in 1985.

Harrisburg's pastoral countryside, close-knit community atmosphere and proximity to Charlotte's amenities have positioned the town for explosive growth. The railroad continues to play a significant role in shaping the town with NCDOT's Piedmont Improvement Project and other investments in road and rail improvements throughout the area. Proximity to Charlotte and major interstate corridors I-485 and I-85 make Harrisburg a highly desirable place to live and work. Town leaders are challenged to manage demand for residential and commercial growth with sustainable and strategic planning.

Community engagement and volunteerism runs deep in Harrisburg, a rapidly growing town focused on preserving its home town character. This community spirit is evident in the evolution of a vibrant all-volunteer youth athletics program, Harrisburg Youth Association (HYA) and the Association's transition to Harrisburg Parks and Recreation Department.