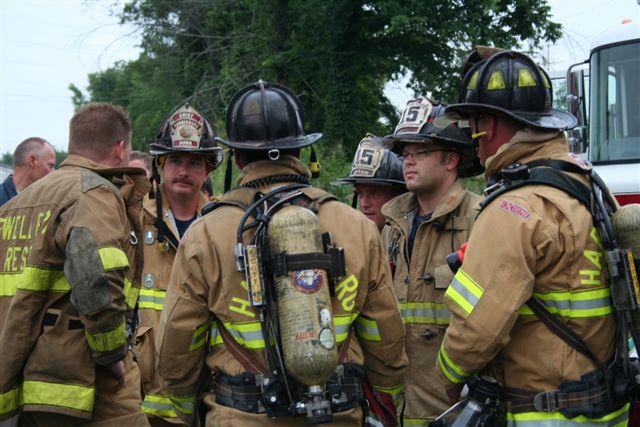 On Monday, March 4th, 2002, Harrisburg Fire and Rescue just finished putting away the water rescue gear from a vehicle in the river and sat down to lunch when communications put out a report of a house fire at 10334 Harrisburg Road. Upon the arrival of the Fire Department, the house had heavy fire and smoke showing with people possibly trapped. The interior crew went into the side door and got about five feet into the doorway when they decided to back out because the floor was "spongy" feeling. When Captain Brad Christopher reached to Firefighter Josh B. Earley to turn around and exit the building, they both fell into the basement. Captain Brad Christopher was able to grab the threshold of the door to pull himself out and then help Captain James Greene and Firefighter Johnny Kiser pull Firefighter Josh B. Earley out as well. A second crew kept the flames off of Captain Brad Christopher, Captain James Greene, and Firefighter Johnny Kiser as they pulled him from the inferno.

Firefighter Josh B. Earley was airlifted to Carolinas Medical Center with burns that covered over 80% of his body. He was evaluated in the emergency room and airlifted to the burn center in Chapel Hill. Captain Brad Christopher was rushed to Carolinas Medical Center by ambulance with burns to his ears, shoulders, and arms. Other Firefighters were slightly burned during the rescue efforts, but were treated and released. Captain Brad Christopher was released from the hospital the next day. Firefighter Josh B. Earley remained in critical condition until March 6th when he succumbed to his injuries and passed away at the age of 23.

An estimated 3,000 people waited in line for up to four hours to pay their respects to Firefighter Josh B. Earley and his family at Hartsell Funeral Home in Midland on March 8th. The funeral was held on March 9th at Bethel United Methodist Church in Midland. Hundreds of people who were touched by Josh gathered to see him laid to rest. Many of those at the funeral were emergency service workers from different departments. The church was filled inside with standing room only and some still had to stand outside to listen to the services. Charlotte Fire Battalion Chief Mike Wilson reflected on memories about Firefighter Josh B. Earley. Chief Wilson said "Earley loved every aspect of being a fireman and performed his duties well. He lived it and breathed it." As the services came to an end, emotions ran high as Chief Wilson officially relieved Josh from his duties by saying "Firefighter Josh B. Earley, you are officially and honorably relieved of duty. Well done, son. Take up and go home."

Earley's casket was placed on the back of Charlotte Fire Department Engine 27 and followed by hundreds of uniformed firefighters. The only sounds heard were the bagpipes playing. When the engine company came to a stop beside the burial site, people gathered around for a short graveside service, where Taps was played. Earley's parents were presented with a folded American flag. Overcome by emotion, everyone cried as his mother placed her hands on the casket and said, "I love you, Josh, and I'll see you in heaven."

Josh was born on January 18th, 1979 in Mecklenburg County. He grew up in Midland. Josh started as a volunteer firefighter at the age of 16 with Flowes Store Fire Department and Midland Fire and Rescue, before joining Harrisburg Fire and Rescue as a part-time employee. Josh graduated from Central Cabarrus High School in 1997. He went on to college and obtained his associates degree in fire science. Josh was hired by the Charlotte Fire Department and graduated from the fire academy in early 2001. Josh B. Earley was one of the finest men you would ever meet. He was truly a hero that paid the ultimate sacrifice as a firefighter. His family at the Firehouse will never forget him and will carry his memory in their hearts forever.

On Sunday, June 17th, 1973 at approximately 1320 hours, the Harrisburg Fire Department responded to a possible house fire in the Roberta Road/Melissa Drive area. Firefighter Gulledge responded as the Officer in Charge. It is reported that the fire was contained to the room of origin, in which Firefighter Gulledge was assigned the task of performing a search in the attic and check for fire extension. Shortly after the call was terminated, Firefighter Gulledge began to experience chest pains and was transported to Cabarrus Memorial Hospital (now CMC Northeast) by Harrisburg Rescue Squad where he passed away on Monday, June 18th, 1973 from a massive acute heart attack caused from heat stress and overexertion.