Located in southwest Cabarrus County, bordering Mecklenburg County and the City of Charlotte, the Town of Harrisburg is located in a prime location for residential and commercial growth. The town was incorporated in 1973 and is governed by a seven-member council and mayor. Harrisburg Town Hall, built in 2004, is located on Main Street in the emerging neo-traditional Town Center development on Highway 49. A town-wide water system was completed in 1980, followed by the town's wastewater system in 1985.

Harrisburg's close neighbors include Charlotte Motor Speedway in Concord and the University of North Carolina-Charlotte, located just minutes from Town Center. Harrisburg is served by the Harrisburg Fire Department - which was brought under the Town in 2006 - and contracts with the Cabarrus County Sheriff's Department for full-time police protection. 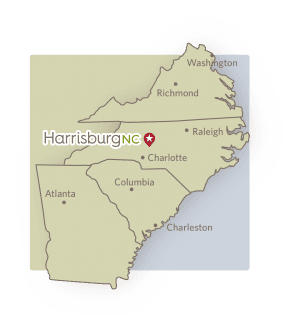 The Town of Harrisburg lies in the Piedmont region of the State of North Carolina, which is the middle region of the state, located between the Coastal Plain and the Mountain regions. The town is notable for an extensive network of creeks and the rolling natural countryside.

The town’s central location in the state and proximity to Interstate 85 and Interstate 485 creates easy access from Harrisburg to other destinations in the mid-Atlantic/southeastern region.

Harrisburg's economic strength can best be judged by its business and industrial growth. With the building of an industrial park, availability of land and the quality of the work force, Harrisburg is embracing smart growth while remaining committed to providing residents with superior quality of life amenities, excellent schools, safe neighborhoods and an affordable tax structure.